Books That Should Be in Every Writer's Library

Books That Should Be on the Poet's Book Shelf

We left Santa Fe and drove south-east out of the mountains and onto western edge of the llano estacado, the staked plains of Eastern New Mexico and Western Texas.

Guess what the backseat did.

The plains are miles and miles, flat and sparsely covered which ever way you look. The land has changed from the sea of grass that the Spaniards found. There is much more Juniper and much less grass. The cattlemen thought they knew more than God about how to manage this land.

To the west we could see a mountain range. I saw a herd of prong horns.

After we passed a place called Eden Valley, there were farms and ranches. I didn't see many before then, but they may have been more than I thought, just out of sight of the road.

We arrived in Roswell and ate the second worst meal on our trip, an Italian restaurant called Portofinos. There was supposed to be a cafe decorated with aliens and such, but it was closed.

We went to the UFO museum. I have seen and read just about everything in there before and wasn't convinced. I'm still not.

We drove south to Carlsbad Caverns passing through a town named Artesia, the malodorous capital. On the north side were several feed lots. If you have never driven by feedlots, I can't describe the smell. Cow manure multiplied by however many cattle are on the lot is the best I can do. It is best to hold your nose and drive quickly. As we got to the center of town, a refinery added to the mix. I think the people there must have long since become inured to the aroma. I know that we city dwellers become so used to the stench of cities that we no longer notice it. I can often tell when I can't smell it, but seldom notice when I can. The people of Artesia must multiply that inuredness by about a thousand. 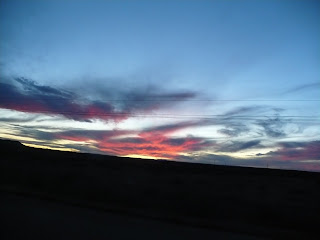 Sunset near Carlsbad. The photo doesn't do justice to the crimson of the sky.


After a much more leisurely breakfast than I would have liked we drove to Carlsbad Caverns National Park. The rest of the family wanted to walk into the Cavern rather than take the elevator down. I had already decided that since I have seen it several times I was going to hang out at the visitor center. I bought a couple of books at the book store. One of them, Hot Biscuits, was a delightful collection of short stories and antidotes about ranch life. The other was Coyote Stories based not on the local tradition, but on the tales of the Northwest Indians.

After I read these stories, I thought a lot about New Mexico. True, these stories are not the stories of the Indians of this area. I know that it is a mistake to generalize from one tribe to another. The best one can do is generalize within the same language family. (Some day I'll spend some time on the subject of how the Eastern (Tanan) Pueblos came to speak a language related to Kiowa. The Kreses group and Zuni have not been related to any other language group. Lifestyles are similar, religion is a problem.)

The Coyote Stories portray Coyote as a trickster who is sometimes a benefactor and sometimes not. Coyote's flaw is self-importance.

One story from my large store of personal antidotes: One of the times I drove from California to Texas, we stopped in Santa Rosa. Instead of staying on Interstate 40 to Amarillo, I went south and then east through Clovis and then to Texas. Somewhere along there, I came to a crossroads. There was a big sign: Congested Area. At the cross roads, there was a gas station/convenience store. Cattycorner to it was a bar. If there were any houses, they were a long way from the highway. My opinion: the only time it was "congested" was when the bar closed for the night.

One of the things I didn't mention was that in Taos, after the dances, we drove around the square. Some of the souvenir shops/artist galleries were open. Now you know why I lovingly refer to northern New Mexico as the world's largest tourist trap.

How does this relate to Coyote? All three things the touristyness, the UFO museum, and the "Congested Area" sign strike me as Coyote at work.

I have never had time at a National Park to listen to the Ranger lectures. One young Ranger gave a very informative talk on Bats. You could tell he loved bats. He had previously worked at a bat research facility. Great talk! Another Ranger gave one on the geology of the cave. She did it quite well, but wasn't the enthusiast that the previous ranger was. Still, I like geology and found it very interesting. 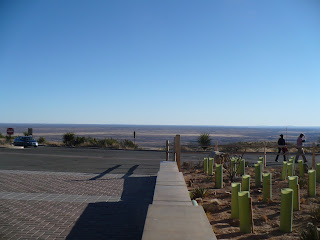 We left Carlsbad and drove east to Arlington and home. I saw a deer on the hillside as we left Carlsbad. It was a long drive in the early dusk and into the night.

When we arrived back in Arlington, my grandson allowed that he was glad not to see snow.

One of my kitties, Baby, was quite happy to see me. She spent the night demanding that I pet her and purring.

The next morning, C.C. gave me the cold shoulder. She would sit where I couldn't miss her, staring down and to the right. She made sure I knew that she was not happy with me. In fact, she wasn't even sure who I was; I had been gone so long. Later when I sat down at the computer, she would come and drape herself over my shoulder as usual, but then she would remember that I was in disgrace and walk away.

Princess treated me to a long and comprehensive list of my flaws -- in her loudest, most strident Siamese voice. She wailed and complained all day.

Angel was very happy to see me when I picked her up from the kennel. She looks thin. My daughter says that when she keeps Angel, she doesn't eat. I doubt that she does better in the kennel, but there is no way to take her with me. She is nearly 11 years old. I hope I have her for a lot longer. She has mostly slept all day.

It was a wonderful trip, but home is good, too.
Posted by Tricia at 8:24 AM